With the Swedish and Estonian traditional music as their springboard FRANDER create music with a strong personality and a sentiment that doesn’t leave anyone untouched. With focus on harmonies and singing their inventive and clever arrangements highlights the lyrics. Stories are sung with warmth as well as intensity. FRANDER displays a musical landscape with sincerity and a love of adventure. 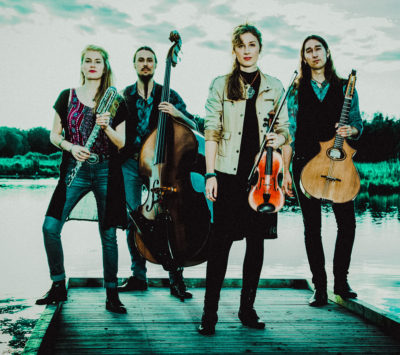 Ever since we were kids starting to play music, we’ve yearned to create something of our own. As siblings growing up together we shared music, dreams and visions which made us curious of what would happen if we wrote music together. In the spring of 2015 the dream became reality when we decided to form a band: Daniel, Natasja and Gabbi together with Saede, who became the fourth member of our family.

We soon discovered writing music together is a very surprising process. As siblings we have a lot in common musically, but we have always had our own areas and preferences. This formed an exciting basis for collaboration where we constantly discovered new things about each other. We’ve learned never to assume we know what to expect. To make things even better, we now have the freshness of a fourth member’s ideas and background. Saedes roots in the Estonian folk music tradition have added yet another flavor.

After working as a band for only a couple of weeks we had the privilege of hosting an international competition in Estonia, where we were awarded for our music. Since then we have toured around the world, including being invited as guests to play at the Swedish embassy in Guatemala. Touring and meeting audiences in so many different countries encouraged us to record our first album, containing our first chapter together. We´re eager to see what the future holds for our music.

About our name – FRANDER is an old Swedish word referring to both family and kindred as well as fellow humans.

“The quartet’s warm, powerful and lovable charisma can hardly disappoint even the most hardened souls.” Nils Thorlund – http://rootszone.dk/

“I would normally be tempted to rate a first recording from a band such as Fraender that’s new to me as “promising”, but the maturity and intelligence displayed here goes way beyond that.” David Kidman – FATEA

“They are astonishing from the very first note.” Anders Sandlund – Piteå-Tidningen

“From the great string band traditions of Scandinavia comes a new group exploring the traditional music of their land seen through the lens of their internationally informed musical spirits. Thank you FRANDER…Cool Stuff!” Mike Marshall

“FRANDER, formed in 2015, is a promising – no, not promising, delivering – new name on the scene, fully formed in this debut album.” Andrew Cronshaw – fRootsmag.com

FRÄNDER will also appear at the Mariposa Folk Festival