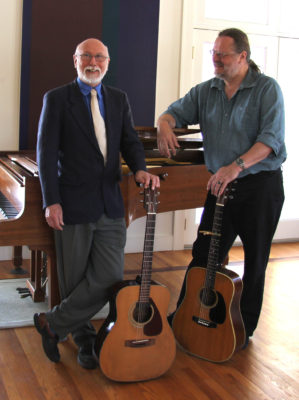 Alan Reid and Rob van Sante coming back to Mapleview

Alan Reid was a vital member of Battlefield Band from its inception in 1969 till his departure in 2010. In that time he toured all over the world and made almost 30 recordings with the band, working with such artists as Garrison Keillor, Van Morrison and Mike Oldfield. The band won awards in Germany, Britain and the U.S. and throughout Alan was at the heart, his keyboards underpinning the bagpipes and the fiddle. In being the first to use keyboards as an integral part of a traditional folk band Alan’s contribution to the band’s story has ensured it’s stature in Scottish culture as well as its influence on many of today’s Celtic musicians. Alan’s singing has long been respected by his peers, illustrated when he was invited to participate in the Linn Recordings series on the complete works of Robert Burns. Moreover his song writing has grown in stature ever since the 1980s when his songs first appeared in the band repertoire, lyrical songs steeped in history, strong in storytelling and rich in melody.

Dutch born Rob van Sante is a guitarist of skill and subtlety. His mother was a child prodigy on piano so it is no surprise that music has played an important part in his life. During the 1970’s, 80’s and 90’s he toured extensively throughout Europe, North Africa and the Middle East. Rob worked with Battlefield Band for 13 years as sound engineer for both live and recorded work. He was commonly acknowledged as their fifth member. In 2010 he left the band to concentrate on playing and recording in the duo with Alan.