The Brian Pickell Band features the fiddle power of Shane Cook, multiple winner of the Canadian Open and Grand Masters Fiddle Championships. Also driving the music are Ottawa legend James Stephens on fiddle , mandolin and viola, combined with the incomparable tandem of Pat O’Gorman on flute, pipes and whistle and Julie Schryer on keys. Brian Pickell stirs it up with guitar, mandolin, banjo and vocals. 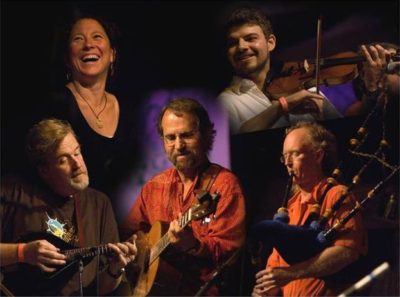 Brian’s compositions are being played at sessions, dances, festivals and fiddle camps everywhere. His tunes are recorded widely: Deaf Shepherd (Scotland), Tony McManus, arguably the greatest guitarist in Celtic music (Scotland), Liz Doherty (Ireland), The Halali Fiddle Band (USA), Oliver Schroer (Canada), Nicholas Williams (Canada), Pierre Schryer (Canada) and numerous others. They are clearly fresh sounding, yet very friendly to old-time and traditional music. The material ranges from driving and raucous, to warm and lyrical. Although all the players possess impressive individual skills, this effort is very much about the great joy of playing together.

June 2, 2017 at 8pm
46 Essex Street
Guelph, ON
Silence Sounds (venue)
$20 in advance, $25 at the door
This show is in conjunction with Rankin/Robertson of “The Outside Track” being presented the following day. Both concerts for a total of $30. Details: fmccairley@gmail.com or Paypal at www.guelphceltic.ca