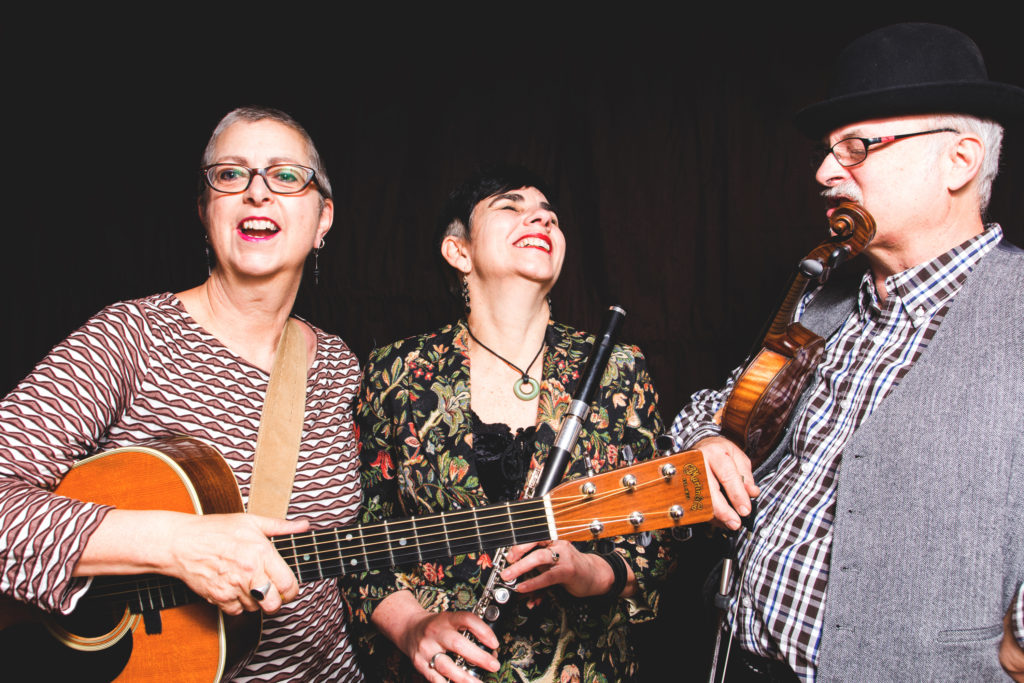 Mostly-original and occasionally-recycled traditional songs and music from Québec featuring Claude Méthé, one of the province’s most-respected fiddlers and singers, Lanaudière flutist Denise Levac, and “Amériquoise” Dana Whittle on vocals and accompaniment.

Mil is a fraction of a unit of measure, a tiny seed growing in the rich soil of Québec and North American folk traditions. An offshoot of trad-folk group Dentdelion, this “parenté” has already produced a bountiful musical harvest with the help of their progeny (Béatrix Méthé and Colin Savoie-Levac, whom they continue to perform with), but with the birds venturing further from the nest, the older generation has decided to sprout on their own (does this make Mil “genetically modified”?). The name is also a reference to the sheer quantity of music these three are capable of generating – Claude alone composes at least a tune per week! Dana, a song-factory herself, and Denise, a gifted composer in her own right, struggle to keep up with his output. Mil dishes up a melodic treat, with a unique flavour, proudly made in Québec from domestic and imported ingredients.

Fiddler-singer-guitarist-trad-Dad Claude Méthé won recognition from the Québec National Assembly in 2012 for his work during the ‘70s and ‘80s with Le Rêve du Diable, a group he co-founded. Arguably the first commercially successful trad band in Québec, it was indirectly responsible for spawning and influencing many others to come. Claude has continued to be a major contributor to the ongoing story of traditional Québécois music as a member of groups Manigance, Entourloupe, Ni Sarpe Ni Branche and Dentdelion. A prolific composer, his solo album L’Amant confesseur was nominated for trad album of the year at the 2008 Canadian Folk Music Awards, but it is the countless musicians across the province and beyond who play his tunes at jams and on recordings who give true credence to his creativity and talent.

As the crow flies, Vermont and Québec aren’t far apart and this is precisely the route singer-guitarist-percussionist Dana Whittle took nearly 20 years ago to become a resident of the Lanaudière trad community and a certified “Amériquoise”. Her music has continued to blossom here ever since her first visits to perform with Franco-American group Jeter le Pont in the early ‘90s. In addition to composing for her own bands, Dana’s songs and music have been recorded and performed by such artists as accordion virtuoso Stéphane Landry and youth group Les Poules à Colin. Descended from a grandmother who sang with the NYC Metropolitan Opera and Mom to an already award-winning daughter (singer-fiddler-composer Béatrix Méthé), she is the veritable peanut butter in a musical sandwich.

Flutist Denise Levac has paid her musical dues for more than 20 years as a certified member of the bustling Lanaudière trad scène and as a member in groups Manigance and Dentdelion. She brings to the table her lovely playing and keen ear, as well as gorgeous, previously unheard and highly original compositions often touched by a European or Celtic sensibility. She wins the prize for having produced the most musical offspring – three of her children are musicians and a fourth is (conveniently) a soundman! In Mil, her flute is not only delicious on reels, jigs and waltzes, but frequently becomes a complimentary “voice” to the texture woven by Dana’s versatile soprano and Claude’s warm, emotive vocals. Naturally reserved and the official “zen” group member (every band needs one!), Denise is nonetheless always game for something new, so with some gentle encouragement and an occasional glass of cabernet, she has been convinced to add her own voice to many of the trio’s arrangements to excellent effect!

While Mil may be a new face to presenters, the freshly-sprouted trio has already earned some cred with performances at the Foire Européene in Strasbourg (France), Asturias and Llanes al Cubo (Spain), New World Festival (US) and as opening act for France d’Amour at the 2012 Fête Nationale (Joliette, QC), not to mention countless performances with Dentdelion and their other respective groups at major festivals and roots venues across Canada, the US and in Europe (France, Denmark, UK…).