Celtic duo, Saskia Tomkins and Steafan Hannigan are professional musicians with over 60 years between them. Twenty of those years have been spent playing together and with others. They have been recorded on over 100 albums, have run their own recording studio to record other musicians’ projects, and have brought up 3 lovely home-schooled kids with whom they have an excellent family band called Clan Hannigan. Spurred on by many requests from fans, they finally buckled down and recorded themselves as a duo, the outcome of which is a beautiful album called Moorchild, released in April, 2017. 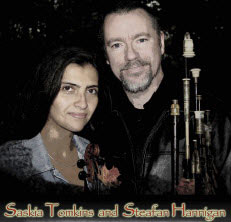 Steafan owns a library of over 800 musical instruments, 40 of which he plays on a regular basis. A Belfast native, Steafan, although already an accomplished musician, began training as an instrument maker and sound engineer in his late teens. Because of his proficiency with a wide variety of instruments, he quickly became a sought after session man leading to work with many top artists including Lorraine Jordan, Il Divo, Julian Lloyd Weber, Pete Lockett, Bjork, Depeche Mode, Gary Barlow, Uriah Heep, Martin Carthy, Dave Swarbrick, John Kirkpatrick, Broderick, Luke Daniels, Sin É, Linn Tilla, Anne Lister, Eileen McGann, Band of Hope, Lammas, Tim Garland, Brian Willoughby from the Strawbs, Loreena McKennitt , Jeff Martin, James Keelaghan, Art Turner, The Afro-Celts , John O’Connor (Startrekkin!) and yes Michael Flately. He was, sadly, unavailable for some wonderful people such as Page and Plant, Tory Amos (wedding), Mary Chapin Carpenter, Dave Stuart, and U2 who he had to turn down!

Having worked in over twenty countries, recorded on over eighty albums and played live in places as diverse as Syria, Sudan, Jordan, Greece Kashakstan, India, Canada, and Turkey has allowed Hannigan to collect even more instruments from a wide variety of cultures, often with a lesson from a native player. He once flew to Greece for a three hour session and flew back on the next available flight as Saskia was expecting and was due to deliver at any minute!

Saskia plays violin, viola, cello and nyckelharpa and plays all of these really well. She loves music – all of it – and will play anything as long as it is good. She is classically trained with a folk background and a jazz degree. She reads music well, improvises in most styles and can play in the background or take center stage, whatever is required. She has recorded on over 20 albums. She is a very busy working musician who plays solo, in duos, Twoish, for example, in ceili bands and in large orchestras. She is an All Britain Champion for Irish music.
When not performing, Saskia teaches strings in a variety of genres privately and in groups. She conducts workshops on improving technique. She also calls dances at ceilidhs and barn dances.

We would have scheduled them sooner but they will be touring in Europe and teaching at festivals and music camps all summer.

For the dancers among you, Steafan and Saskia will be providing the music for the Fiddlefern Country Dance in Owen Sound the evening before this concert. Fiddlefern.ca